Guest Posting vs Press Release: The Differences & When To Use Them 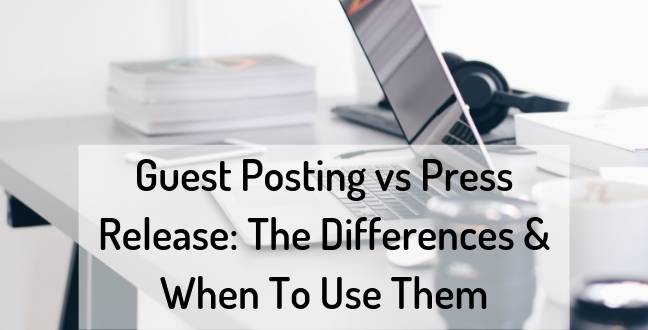 Guest Posting vs Press Release: The Differences & When To Use Them

We always say content is king, and you need to create good actionable content for your readers to get those backlinks.

But guest posting and press releases should not be ignored too. There’s no denying that they are still a relevant technique to boost backlink profile and up your ranking game.

But what’s the difference between a guest post and a press release? Which one would work better for a certain situation? Let me break that down to you.

Writing a guest post is just like writing a blog post on your own website. You need to put in just as much effort and content to make it stand out. Not forgetting every single tweak that you can to make sure it ranks.

While choosing a topic for a guest post, you usually have no free reign. The topic will have to be heavily related with the theme of the blog you’re guest posting at.

A few points in choosing a suitable topic that can help you to successfully pitch it as a guest post.

While for a press release, there are several rules that you need to follow.

A blog is usually aimed at the general audience with varying levels of knowledge in the topic you’re writing about.

So you really want to look through the blog you’re guest posting at to gauge the specific kind of audience they will attract.

Since you’ll be writing for a general audience, you want to keep the tone of your guest post casual, engaging and direct.

Adding lists, images and infographics can help make a more interesting post too.

Perhaps sneak in a joke or two in there to keep it entertaining.

Depends on the topic, you can always add in some personal opinions or share stories based on your own experience, that can definitely help make your post more uniquely yours.

Since this is a guest post, you want to try to stand out from the crowd. Be interesting enough that the readers will want to read more of your stuff. Or perhaps some other blogger will extend a guest post invitation to you.

If you can get that, you’re nailing guest posting.

You want to sound impersonal, professional and straight to the point.

Regardless if you’re hiring someone to write a press release for you or you’re writing it yourself. It’s always a good idea to read through some good press release to understand the suitable tone needed for one.

Here is a checklist to see if your press release draft is fitting.

You can always head over to our news hub. There’s a big collection of press releases, updated everyday, that you can refer to.

Here’s a piece of fitting advice I’ve read about writing a press release.

The same can’t be said for guest posting.

As a rule of thumb, only guest post in another blog that is related to your own niche.

For example, if you’re selling travel backpacks and luggage, you can definitely fit in a travel blog, but not a food recipe blog.

You can search for a guest post opportunity in a few ways.

And that is only the first step, after successfully locating a blog that’s high quality, has your desired visitors demography, and is actually open to accept guest posts, you’ll still have to pitch them your content, which we’ll discuss later.

On the other hand, for press release it’s really all about choosing the correct service that serves your needs.

From the branded high end press release distribution service providers to the midpoint providers that won’t give that much dent on your wallet to the small sellers on online marketplaces. There’s a whole lot of choices that can fit any needs.

Compared to digging through multiple blogs to look for a guest post opportunity, ordering a press release package is much more easier and straight to the point.

Now, just fill in all the required fields and click on the register button to create an account.

Once you’re in the account dashboard, click on the submit press release tab. There, you’ll be prompted to fill in all the details of your press release to be submitted.

And if you haven’t bought any credits before, just click on the top up credits option to choose among the four circuits for your press release.

Once you got some credit in your account, you are ready to send out a press release to boost up your online visibility.

Should I Guest Post Or Send A Press Release?

Guest posting should be an ongoing link building effort.

Also considering the unpredictable outcome of a guest post pitch, you should go for it whenever you get a chance to pitch.

Guest posting is best used when you need to build up your reputation in a certain niche.

By leveraging the existing readers of the blogs, you are contributing to their blog in return for earning some new readers of your own.

Backlink wise, it differs from one blog to another. Some blogs will let you have a do-follow link back to your own blog in the small “about the writer” box on the bottom of the content.

So it might not be useful when you need a quick ranking boost, since those are more link based.

More about link, it’s better to make a little research on the backlink policy yourself instead of asking about it in when you’re pitching for a guest post.

You don’t want to risk sounding like you’re just there to get a share of their link juice.

So as long as you’re actively updating your own blog, you should be actively searching for guest post opportunity as well.

Guest posting is suitable if…

Now, what about press release?

Sending out press releases is a reliable and easily available way to spread news and gain backlinks with a relatively short turnaround time.

Despite the seemingly limited scope of choosing a suitable topic for a press release, most press release service agencies would be glad to help take care of that for you with their in house writing service.

If you need a way to quickly get some backlinks for an immediate boost on your search result rankings, press release will work great for that.

Do keep in mind that due to the news related nature of press releases, older press releases will be periodically removed since they are no longer considered “fresh” news.

Press release is suitable if…

Both guest post and press release, if done properly, can bring a positive boost to your website’s ranking, your online visibility and your authority in the niche.

Instead of choosing only one of them, they are more beneficial if combined into one plan.

Get instant visibility boost with press release while steadily increasing your connections and expanding your website visitors via guest posting can be a tremendous help to set any new websites on their fee.

Then send out a press release from time to time to push out fresh news about your business.

What do you think about this plan? Let us know if this works for you!