The world moves on news information.

From company reputation to decisions based on financial coverage and political developments, the news impacts our lives directly and indirectly.

So it matters when you ask the question, “Where can I distribute my press releases?”

Because what shows up in your search results and where you are feature is important to shape business reputation and better public relations.

Being in the business of press release, we’re constantly on the lookout for these news and media outlets which can help boost our clients’ marketing efforts.

Of course, it’s not just authority. Before you set out to attract press coverage, it’s important to ask yourself the question – What are your business goals?

Audience reach is also an important parameter when assessing the potential of these news outlets since ultimately it is about expanding the visibility and reach for our clients.

That’s why we have compiled this list of Top Media Outlets in the United States, taking into consideration their reach, traffic, and virality.

Do note that the list strictly includes online publications comprising of the best newspapers, magazines, and circulations in the United States. It’s arranged according to the sites domain authority and the average traffic stats are based on Similar Web as of July 2019.

Note that Domain Authority (DA) is a search engine ranking score developed by Moz that predicts how well a website will rank on search engine result pages (SERPs). DA score ranges from one to 100, with higher scores corresponding to a greater possibility of higher ranking. 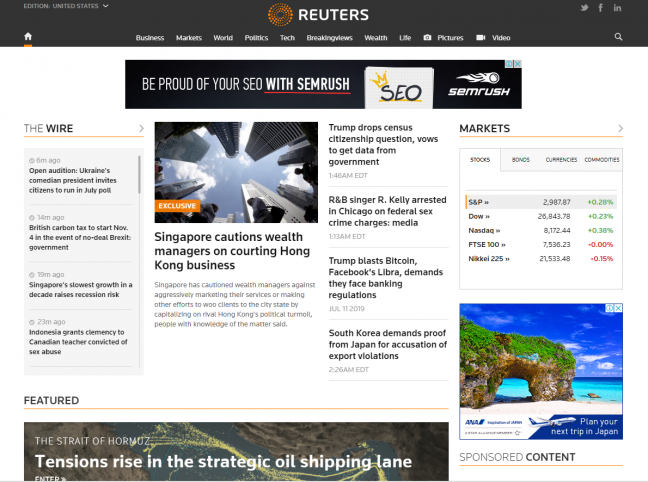 There you have it – the top media outlets in the United States.

With these onsite traffics, and high DA backlinks, being featured there will help your business website in many ways from increasing website authority, traffic, visitors, and connecting more users!

But before you set out to attract these press coverage…

One key question for any press release distribution should always be this: who are your target audiences?

One of the most important press release SEO best practices, relevance is always important when it comes to choosing the sites you want to show up on.

Because let’s say, you are a cryptocurrency site, it wouldn’t make much sense for you to appear on the Discovery Channel or VOUGE, even though they are both highly authoritative sites.

Unless you are a blockchain startup advocating green thumb or disrupting the fashion industry, it wouldn’t make much sense to both human and search engines.

That’s why you need to take topical relevance into consideration, and feature your news at the right sites. Do you have any other sites you think that deserves a mention? Leave a comment down below.